One half of Croatia is covered by limestone that spreads to the south and west of the city of Karlovac and harbors most of our caves and pits. In this hollow terrain about 10,000 caves and pits were mapped, but cavers estimate that their total number could easily double. It is not widely appreciated that the towns and villages we live in, the fields we farm, the roads we travel, and the hills we walk on hide underneath a web of subterranean canals. This invisible system is vital because it is the largest Croatian potable water reservoir!

Karst underground is threatened by hundreds of illegal waste dumps

The Clean Underground initiative gathered data on polluted caves and pits from the archives of more than 20 speleological organizations. So far, we have uncovered over 700 contaminated sites, but, sadly, this number is ever growing.

The problem of waste disposal in karst underground is spread throughout Croatia. Our polluted locations map almost completely overlaps with our karstified areas: there is no difference in the pollution of urban areas, protected areas (National Parks, Nature Parks) or distant Adriatic islands.

Of course, illegal landfills are not an exclusive problem of karst areas (Slavonian forests are also full of waste), but karst ecosystems are extremely sensitive to pollution. They are porous, so in them water flows fast and without any possibility for purification directly into groundwater reserves, thus dispersing toxic substances from the polluted surface. Outside karst areas toxic compounds will be partially cleansed through layers of soil by microorganisms before they even reach groundwater. In the Dalmatian limestone (i.e. karst), water movement is incomparably faster and has no potential for self-purification. What’s more, caves and pits are in fact natural waterways leading to groundwater, so they are the worst location to dump one’s trash! Pits may be in total darkness, but what is cast in them does not vanish! Nothing could be further from the truth: environmental conditions in caves and pits are constant, decomposition is slow and the dumped waste slowly breaks down for hundreds of years! 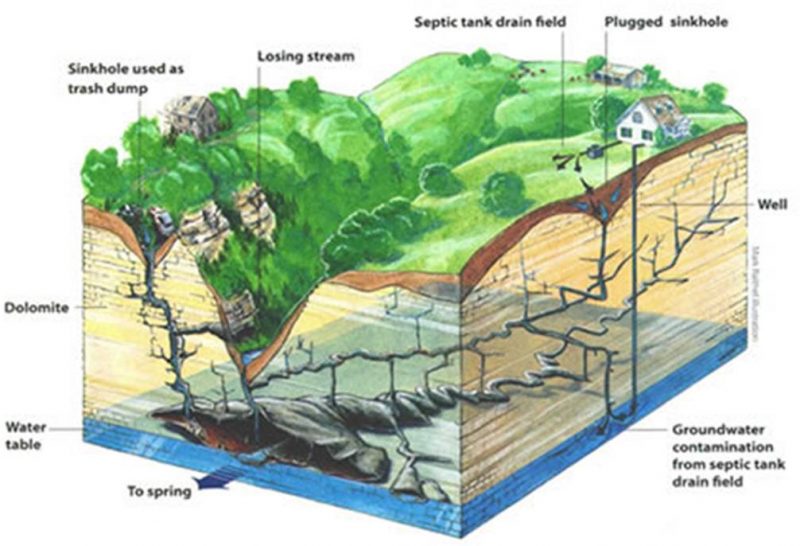 Undoubtedly, part of the problem lies in the fact that organized waste disposal has only recently been widely available in Croatia. Fifteen years ago, about half of our territory had organized municipal waste disposal, and in part because of that, locals have often thrown their waste into pits. The composition of waste has changed – 50 years ago, household waste was largely of natural origin and contained little chemicals, but today plastic packaging, automotive tires and other household waste can pollute the environment for decades. Together with communal waste, industrial, construction and slaughterhouse waste are often found in these pits. Various small and large businesses illegally and immorally reduce their operating costs in such a way. Residents of karst areas must be particularly sensitive to these questions because: what we throw into the underworld, will sooner or later end up in a glass of water!

According to the Nature Protection Act (OG 80/13) all caves and pits are protected and are of particular interest to the Republic of Croatia: “It is forbidden to damage, destroy and remove flowstones, cave fauna, fossil, archaeological and other finds, to dispose of waste materials in caves and pits as well as to carry out other actions and activities that change the living conditions of the area.” In theory, National Parks, Nature Parks and other institutions are responsible for cave protection, but unfortunately in reality only speleologists have an insight into the underworld and are proactive about its protection. By law, local Communal officers should organize the cleanup of illegal waste, but in case of waste in caves and pits, this is completely unenforceable.

Apart from organizing dozens of cleanup campaigns and lectures, the most significant success of the Clean Ground initiative is ensuring that underground waste dumps were for the first time recognized as a problem by state institutions and included in the Waste Management Plan for the period 2016-2022. The polluted locations are also visible on state-managed GIS databases (Bioportal and ENVI Atlas of the Environment). By reporting contaminated sites to Clean Underground, locations are simultaneously displayed on state databases so speleologists have become an important link in karst protection.